Tampa Bay, FL -  Welcome to the #9 Bowl, no its not named after Sonny  but tropical depression #9.  I'm Hap Haszard and I'm covering the game from the pressbox, due to the change of schedule, our fearless leader TK could not make it to cover the sidelines.

I arrived at the team hotel around 12:45, and from some of the bands of rain felt I was lucky to have made it that soon, Orlando was totally awash, the rest of the way it was bands of heavy rain then slacking off repeated until I reached the hotel, it was raining and windy when I arrived.

While I was in the hotel lobby waiting for the team to arrive, I got to sit and talk with Jay Gruden's parents, a very delightful couple.  The team was scheduled to arrive around 2 pm but it was 3 before they arrived.  Once Jay arrived I left since I didn't want to intrude on their reunion.

A shaky out of focus picture of my credentials

Just picked up my credentials 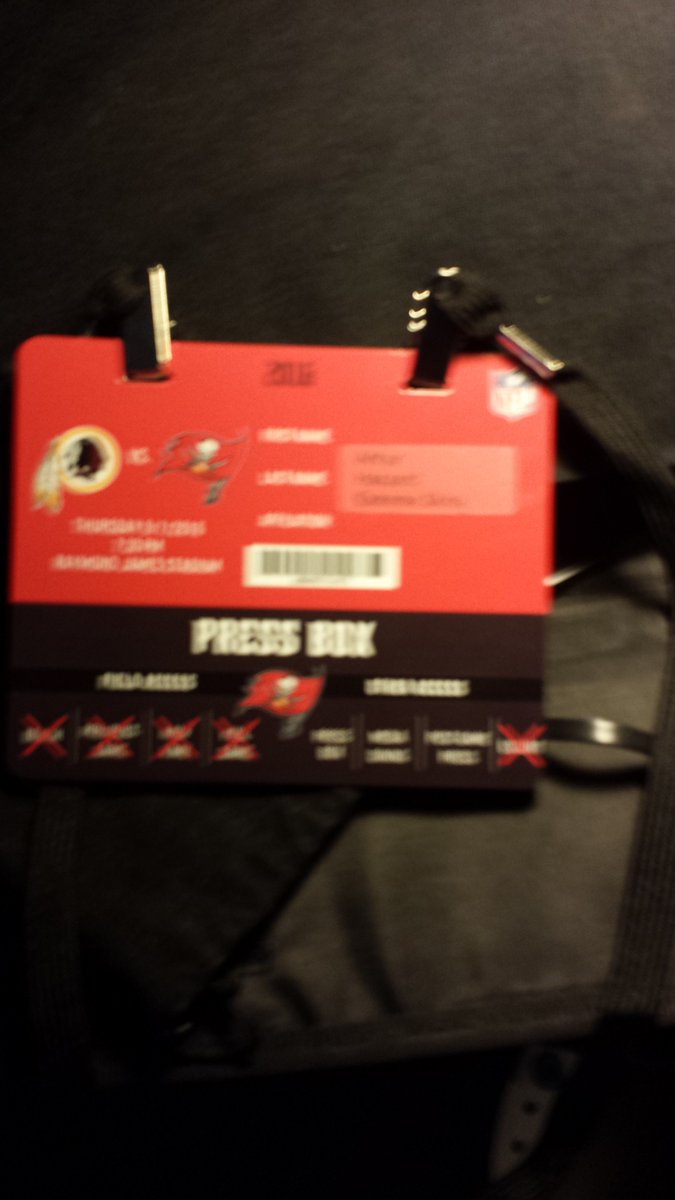 [/]
The field is covered and probably will be fairly good for the first quarter.  I haven't had a chance to go down and check it out yet.  I have a sideline pass so will go down during warmups and try and get some pictures from my fancy flip phone 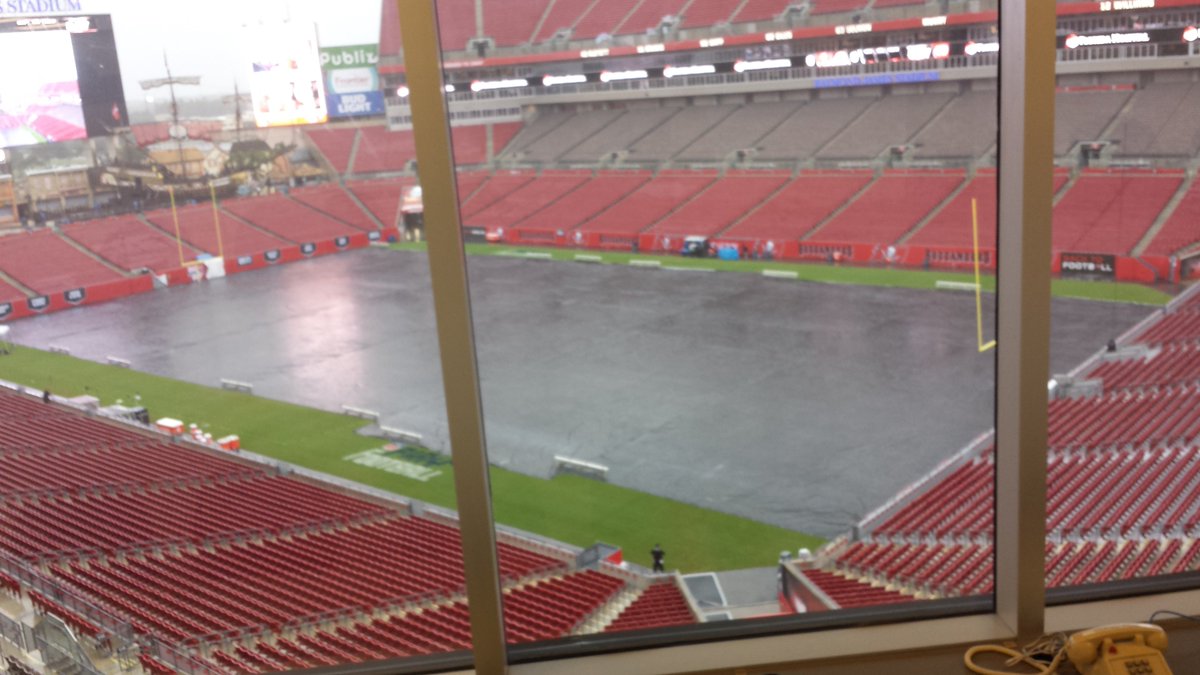 I just located my seat in the press box, I'm in the very first row right at the window, last time I was in row 3 over so far I could barely see the field. Really nice to sit with the big boys.  Brian McNally beside me, and the missing TK on the other side. 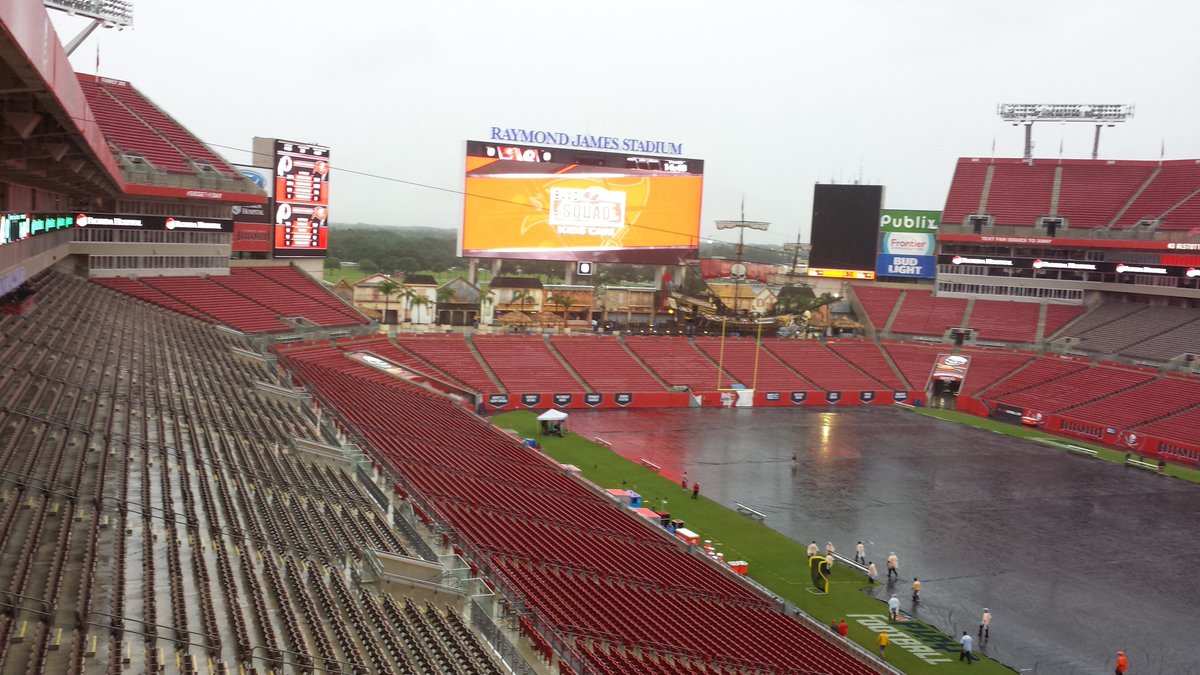 The are removing the tarp from the field now.
I think the caterers here at Raymond James produce the best media meal I have had at any stadium. Tonight I went thru the Brisket line then back to the submarine line in honor of the weather.  I even ate an extra cookie for TK, and it was good.
HapExtremeskins ‏@HapHaszard 22m22 minutes ago

Time for a little refreshment 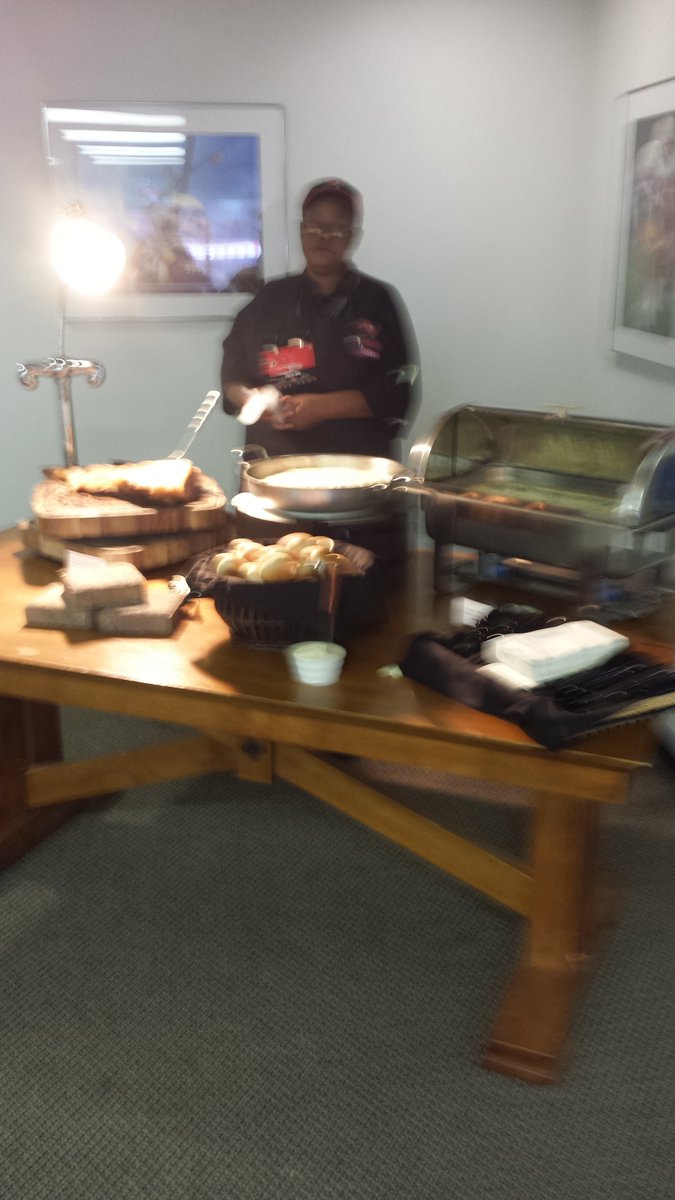 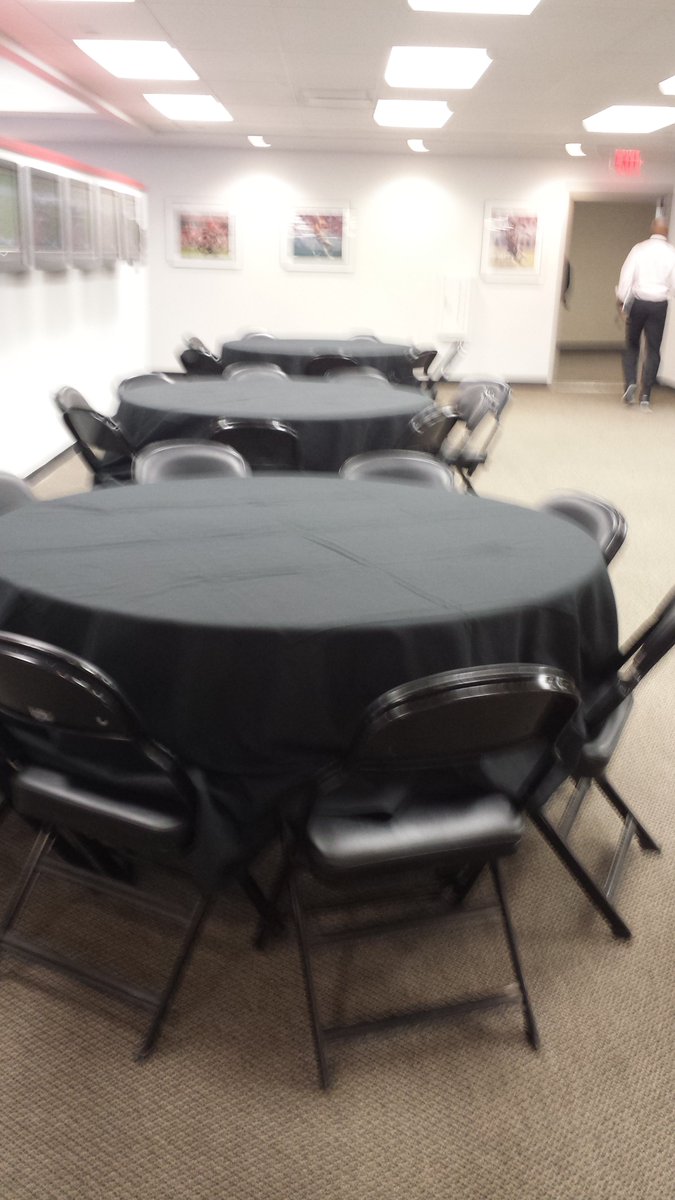 Please excuse the fuzzy pictures but these darn flip phones are hard to hold steady especially at my age.
They have removed the tarps from the field, several Bucs out throwing the ball around  no sign of the Redskins yet.  Heading down to the
field for a quick look around.
Back from the field from up here it doesn't look like its raining but down on the field its coming down pretty steady just a solid drizzle no frog stranglers like in the DMV.
A couple  of redskins slowly coming out on the field.  Dustin Hopkins is doing wind sprints for some odd reason since he is all by himself.

TAMPA, Fla. – The following members of the Washington Redskins did not travel with the team and will not play this evening:

A lot more Redskins are on the field, Mostly seeing Tress Way and Hopkins kicking the ball around couple guys chasing the ball, the rest are playing catch.

Redskins done with drills and warmups headed back to the locker room, Bucs still on the field

A couple of sideline shots

Pardon me I'm standing for the National Anthem

Tampa won the toss elects to kick off

It appears that our run game is much stronger than the Bucs can handle, our Defense seems to be able to stop their run game fairly easy.

Sudfeld's timing looks off on his passes.  Have to see if he settles down in the 2nd Quarter.

Redskins really working on causing fumbles, going for the ball in gang tackles

Looks like for today at least Ross has punt return duties

Mac Brown is getting big chunks of yards on his carries.  Making the most of his chances

Bates and Wakefield getting some penetration into the Bucs backfield

Rough half time stats not official

Tampa on their first series got some moxie and drove to the Redskins 32 before they were stopped, a 50 yard field goal gives the Bucs their first score of the game now 13-3 Redskins

Thorpe took a short pass and was pushed out of bounds 41 yards later.

11 yard run by Kelly then a false start penalty

Kelly is hard to bring down takes more than one person.

Sloppy play by both teams ends the 3rd Quarter

The Bucs have a nice series going nice combo of pass and run moving the sticks  Bucs 3rd or possibly 2nd string QB look a lot more polished than Sudfeld nice passing game all of a sudden.

Bucs another nice drive going, 1:59 sec to go at Redskins 38  off sides penalty give Bucs first down at 33