Greetings from the dome that's so Super it should wear a cape. Last time I was here, I was actually in the mist of a four day vacation, sitting in the Club Level in the End Zone watching a former #2 pick tease all of Redskins Nation with what could have been. I vividly remember sitting there a few minutes into the 3rd Quarter  & you could hear a pin drop. There was a voice behind saying "I don't understand..." only to be answered by another voice saying "Why is this happening to us..." That was a Week 1 Opening Day game.

Today, however it's a completely different team on both sides of the ball. And it's Week 11. The Saints lost their first two games only to have ripped off a seven game win streak since then. Are they due for another loss & that streak to end? Maybe. Will the Redskins be the ones to do it? Well....Here's the Injury Report from Friday: 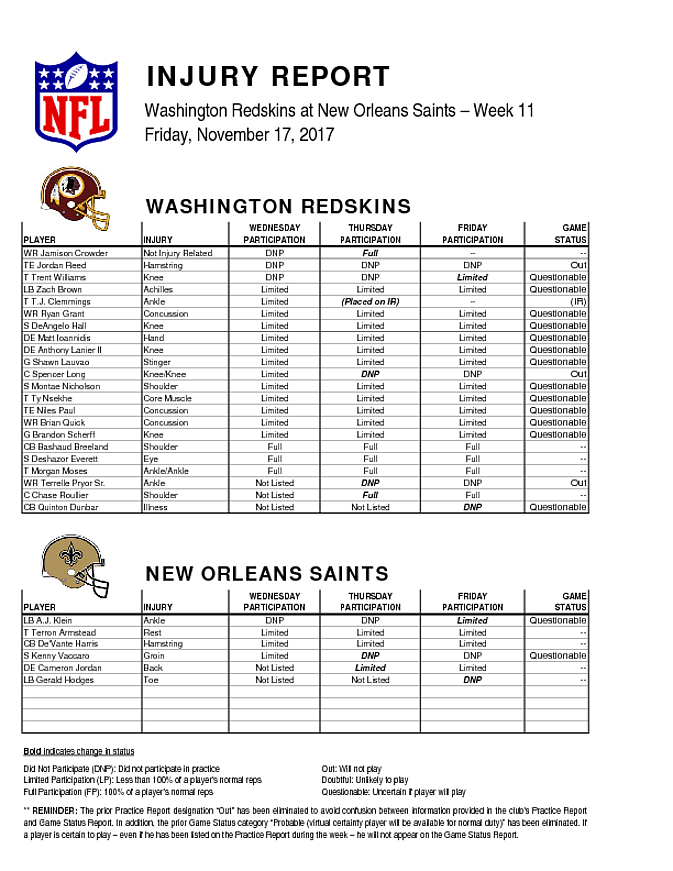 Three are already out, a fourth has joined the IR list, & 13 are Questionable. You have a backup Center ready to go. Trent Williams is still banged up with his knee issue & probably should have been put on IR a few weeks ago. Lauvao is had been limited all week with a stinger. Starting Center, Spencer Long is out with a knee. Pro Bowl Guard & former first round pick, Brandon Scherff has been limited all week with a knee issue that's been going on the last few weeks. Right Tackle Morgan Moses is the only starting OL that's actually been a full go at practice this week. That said, this team also went into Seattle with a patchwork OL, fought like hell & pulled off an upset.

Can they do it again this week? We’ll find out in a few hours.