So, last week I went through the Falcons game and came up with a few players I thought were intriguing to keep our eyes on as we moved forward through the preseason (with a ton of video to boot, probably too much as that page is/was a bummer to load

The disappointments I honed in on against the Falcons were Stephen Paea, Arie Kuandjio and Niles Paul. The impressive performances came from Kendall Reyes, Anthony Lanier (before the rest of the world started noticing him), Carlos Fields, and a special guest appearance from Terrence Garvin.

So how did these guys do against the Jets? And were there any other performances to add to the current list of Extremeskins Coverage intrigue? Let's find out, shall we (with a little less video for the sake of our browsers, mmkay)? 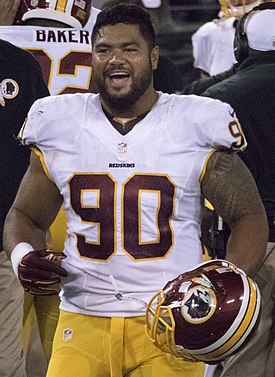 Watching the game in the pressbox at FedEx field, I made it a point to focus in on Paea with my cheap Walmart-purchased binoculars (hey, it was last minute, Spaceman Spiff said I'd probably need them) when he came into the game. From what I saw, he was much improved, however, we must keep in mind that he came in about five minutes into the 2nd half, which means he was playing against lesser talent (and may further indicate a demotion on the depth chart). That being said, last week against the Falcons, he seemed to be moving in slow motion and the only positive he showed really was with his arm strength.

Against the Jets, however, it was a different story. He moved very well and was a lot more explosive off the snap, to say the least. Let's take a look at a couple of examples.

Here, he's lined up at RDE and you can see him move laterally well while penetrating, putting himself in the perfect position to make the tackle:

Here, again at RDE, he shows good lateral quickness another time by cutting to his left to find the open lane to the QB, then he puts on the jets to get the sack:

Suffice to say, much better from Stephen Paea. 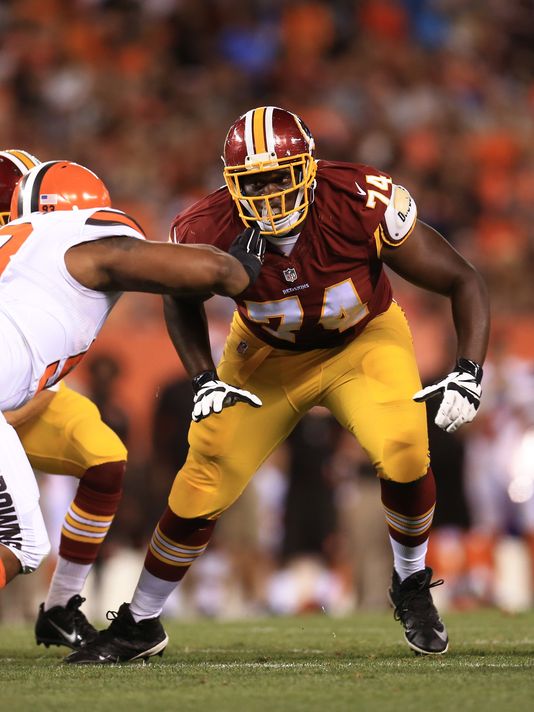 Unfortunately, the same can't be said about Arie Kuandjio, who continued to disappoint. Most of his plays aren't necessarily a negative, but they're plays where he can't be considered as having had a positive impact. He often is either out of position or generally not involved when he otherwise should be. But then there's bad as well.

Here, at LG, his guy gets underneath and is able to push him back, who then winds up making the tackle on Keith Marshall:

Here, again at LG, is the play I believe John Keim was talking about a couple days ago when he mentioned Kuandjio getting pushed to the ground:

Yeah, let's hope we get a better showing from him against the Bills.

Good news for Niles, though, he definitely looked better overall. He did whiff on his first play, but then seemed to make up for it with better blocking in general. Let's take a look.

Here, lined up at FB and motioned to the left, is the aforementioned whiff:

Here, lined up on the outside to the left at TE, you'll see him get a solid block on #21 of the Jets and maintain it throughout the play:

Here, lined up as the outside TE on the right side, you'll see him execute a perfect block:

Kendall Reyes continued to impress for the most part. Nothing spectacular, just solid, and I get the sense that we'll be hearing that a lot when it comes to his play throughout the season.

Here, at RDE, he gets some decent pressure on the QB and flushes him outside of the pocket:

By far, the most interesting aspect of Lanier's game was how much earlier he was put into the rotation than in the Falcons game, which may indicate he's moving up the depth chart a little. I asked him about it after the game and he seemed to agree. As for his performance, it wasn't as enjoyable to watch as the film against the Falcons (that's not to say he played poorly or regressed, just nothing splashy), but he certainly had his moments. Here are a few examples.

Here, at RDE, he gets quick interior penetration:

Here, lined up at LDE, he gets a near sack after beating #64 of the Jets handedly (gotta love the way he lays out there):

Here, lined up at RDE, of course is his end of game sack. This one's all about his hustle and awareness:

All Garvin has done these past two games is make plays, so I'm putting him here instead of Fields. Last week against the Falcons, he was in on a bunch of plays along with Fields and Lanier, so I didn't give him his own spot and just mentioned his play secondarily. I don't know if it's the weaker competition or not, but he's really impressive out there. Let's take a look at some of the plays he made against the Jets.

Here, lined up on the right side at ILB, you have to love his back pedal and then quick reaction to break up the pass:

Here, again lined up on the right side at ILB, he shows his speed as he slices his way through to apply quick pressure on the QB, causing the incompletion:

He was also in on a fumble recovery (right place, right time, so no need for a video really), but it just shows his hustle. He's really flying around out there and is fun to watch.

Well, that does it for now. We'll see how these guys look on Friday against the Bills as well as their spots in the rotation. Will they improve, stay the same or regress? Will we see them higher on the depth chart, the same, or lower? I might do a part 2 of this if I have the time and add some others to the list. Hope you all enjoyed it, see you around on the board!