Welcome everyone to your Preseason Week 3 coverage on Extremeskins, it's TSO here in the Press Box with my man @Spaceman Spiff, who will be providing his usual assortment of magnificent pics from the sidelines, ready to provide you the best damn coverage on the planet!

So here we are, as usual, placing way too much emphasis on a preseason game. We just can't help ourselves, can we? Especially not when the team has come out looking uninterested, flat, emotionally disconnected, or whatever amatuer psychobabble we find fitting to describe something we probably shouldn't.

Alas, that won't stop us!

It's been pretty frustrating to see the offense sputter as much as it has. And while there are legitimate reasons for some of it (like the lack of practice time with Reed and Crowder - who are arguably the most important pass catchers on the team - as well as Doctson pulling his hamstring after starting out camp on fire), some of it has seemingly been inexplicable (like the generally poor play from the Oline as a unit, and specifically Brandon Sherff who's more often a massive positive than not).

The defense, on the other hand, has generally looked okay. Not great, by any means, and definitely not after Rodgers did what Rodgers does to people... but "looking great" is not something that truly matters during the preseason, anyway.

We've seen solid play from Dlinemen like Anthony Lanier II, AJ Francis, Stacy McGee (outside of his two brain farts that resulted in penalties that gave both the Ravens and Packers first downs during otherwise stalled drives) and our beloved first rounder Jonathan Allen, while we've seen excellent play from Phil Taylor Sr. (who's just been an absolute wonderful surprise) and Matt Ioannidis (who seems primed to take a significant leap from his rookie year). We've all been relieved to see both Foster and Brown starting at ILB the last couple weeks. The secondary hasn't been tested so much, but they didn't look too good against Rodgers (specifically Breeland going up against Nelson), so hopefully we get a better showing there.

In the end, I think it's safe to say we're all just looking for that spark. That glimpse into the potential of this roster and what they can do as a team. It's been too disappointing of a preseason to really feel good about anything, but there is no doubt that this roster has talent. Arguably more than it ever has during Snyder's tenure as owner and maybe even before that. But they need to start getting in sync; the players we've become accustomed to watching perform at a high level need to start, well, performing at a high level; the coaches need to show the fans they've got a motivated team with positional units working in concert with each other; and it'd be nice if some of the new pieces stepped up and showed us why they were added to the team or what the hype is all about (perhaps none more important than Chase Roullier, who will be starting for an injured Spencer Long at Center).

I don't feel like we can afford another ugly outing. The anxieties about Gruden's methodology during the offseason will be hard to not view as legitimate. The concern that it'll leak into the season, as it arguably did last year, will be overwhelming. They need to show up today and send out some good vibes. Stay tuned here on the ES Coverage Blog as well as the ES Gameday Thread and let's find out if they do together!

ES EXCLUSIVE ONE ON ONE INTERVIEWS 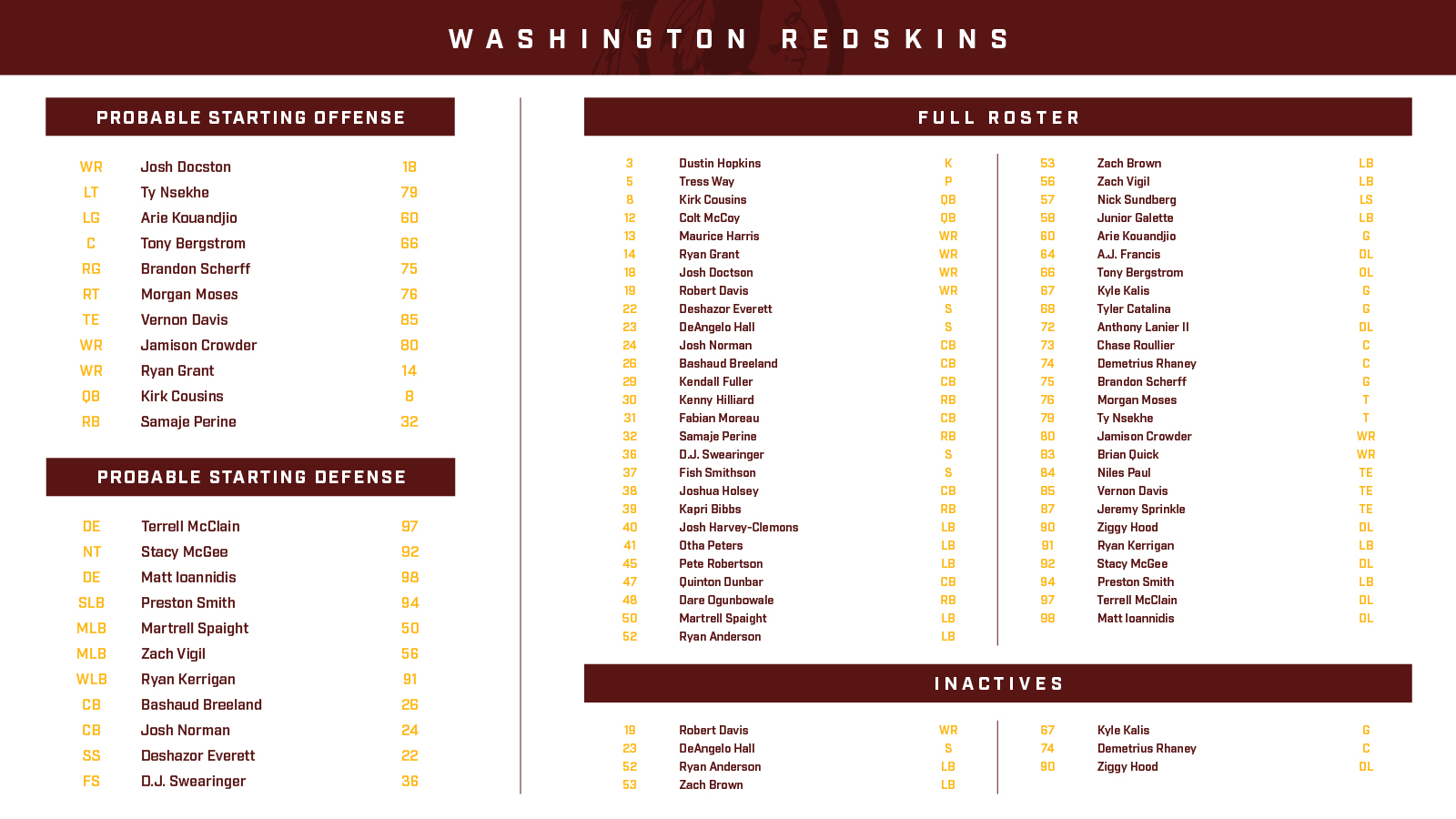 It was really nice to see us finally get our running game going for the first time this preseason. Kelley and Perine both looked sharp once the offense got going a bit in the 2nd quarter. Roullier has looked really good out there. Sherff started out looking terrible again, but then really picked it up in the 2nd quarter. Can say that about the entire Oline, really. It's been frustrating to watch Pryor have as many drops as he's had, but fortunately he also picked it up with a great catch. Kirk has been inaccurate, consistently pressured, and just generally looking out of sync with his receivers, but again, he picked it up. The pick six was just woeful, though it seemed to light a fire since after that the offense started moving the ball.

Defensively, they looked good after that pathetic first drive. Our Dline hasn't looked good, but hasn't looked bad, either. Seeing Taylor go down was depressing, especially since he's been having the best preseason on the line. Hood is still an issue, but he had some good plays. Allen looks like he has looked... flashing potential but definitely not really impactful yet. A rookie, basically. Ioannidis didn't look as good as he has in the previous two games, but not bad. McGee had a nice rush, and McClain was just okay. Both Francis and Mbu looked good. The secondary is a little scary right now. That first drive was just horrendous, everyone off, no tight coverage, easy completions galore. Frustrating crap. But they picked up a bit, as well, and it was great seeing Norman make some impact plays.

Alright, be back after the game with our usual locker room interviews and awesome pics from Spaceman Spiff, see you then!